Our cocoa seeds, in freshly harvested cocoa pods, arrived by air from Ghana last Thursday. After 2 hours of filling in papers at the airport we finally got them out. On our way back to town, in the late afternoon, uncertainty arose as to how quickly we would need to plant the seeds.

According to the sage advise we got from cocoa farmers considerably more skilled than ourselves, fresh cocoa seeds starts to germinate 3-5 days after harvest. If the seeds germinate inside the pod, the planting operation becomes trickier and the result is often that fewer seeds grow up to become healthy trees.

We therefore decided to play it safe and travel up to Sanoiye immediately. The evening was spent throwing together everything we needed for the trip (tools, some manpower, food, a car & a driver). I managed to get to sleep around 1:30 AM, Friday morning, with the alarm set for 2:30 AM. At 3 AM my friend and colleague Reed came to pick me up at the hotel and we then got the rest of the guys (Joe and William) and left Monrovia.

We arrived in Sanoyie around 7:30 in the morning and immediately set to work finding laborers for the day, and planning the day's work. Our goal was to construct the nursery shade, fill about 3000 bags with good black soil (which had to be found somewhere in the bush), and plant all the cocoa. After that we had to educate our local nursery manager in the daily procedures of the nursery.

Unfortunately Friday is market day in Sanoyie, which makes it very difficult to find people willing and able to work. I was hoping for 30-40 persons to do the job, but we ended up with 15. While I trudged away into the bush to find suitable soil for our nursery bags (an exercise from which I have no pictures since my hands were covered in mud the whole time) Joe went to work directing the brushing and clearing of the nursery site.

I learnt a lot about local soil conditions from my 2 hours spent walking the forest in which we'll plant the cocoa, but it was William who found the perfect spot to take soil. Such soil should be high in nutrients (which means from the forest area), high in humus (which in Liberia means it should be taken in or close to a swamp), and fairly sandy to facilitate root formation.

While the guys were having lunch I took some time with the camera (see subsequent post on palm oil and palm kernel as well). As can be seen by the pictures, the dry season in Liberia is far from as harsh as in other parts of Africa. There is still a lot of greenery even at the height of the dry season (Jan-Feb). One difference to the rainy season is that there are very few flowers and other brilliant colours around. But even this rule has some exceptions.

After lunch the brushing and clearing of debris continued while part of the group started hauling the black soil (which was a good way off) and cutting bamboo for the construction.

We also found a guy that was cutting palm fruit bunches and managed to persuade him to cut some leaves for our shade.

There is no intensive production, no plantations, going on in the area where we are establishing the cocoa farm. Instead you find rubber trees here and there and palm trees here and there. It makes for a nice mixture of plant life but a highly expensive and inefficient way of doing agriculture.

None of us had slept very much during the night, but Reed, who was driving, had the luxury of being able to take a very long nap as soon as we arrived. The rest of us were getting pretty tired as the afternoon progressed.

Both Joe and myself managed to get away for half an hour to get some sandwiches (Joe makes great sardine sandwiches that pack a powerful garlic punch) and a little bit of rest. I snapped the mandatory generic photo of village kids.

As the early afternoon turned into late afternoon the frame of the shade really began to take shape. My biggest input at this point was some judicious use of a decameter and the 3-4-5 rule to measure out a sufficiently large rectangle to cover all our nursery bags.

I realise that at this point there have been not photos of me so I throw in this photo from Joe's camera to prove that I was actually there. 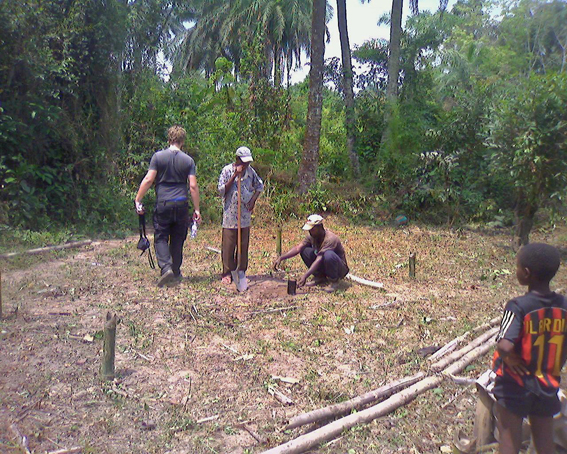 Working hard... with a camera.

While the work on the shade was going pretty good (at least the frame was up) the work on moving soil to the nursery site and filling the poly bags with it was going awfully slow.

We had to accept the fact that not only would we finish this day (we'd known that since lunch) but we wouldn't even plant any cocoa today. The sun was setting and our energy was going with the light.

It became time to wrap up and I had a nice 4h car ride down to Monrovia to look forward to. Joe and William, who unlike me did not have to rush down to a Saturday meeting, stayed on for another 2 days.